WE ARE RECRUITING!! Click here to find out more about careers at Tuckwells
Home News & Events The latest from Kris Grzelak, Farm Manager at Tuckwell Farms, in Suffolk
Back to Results 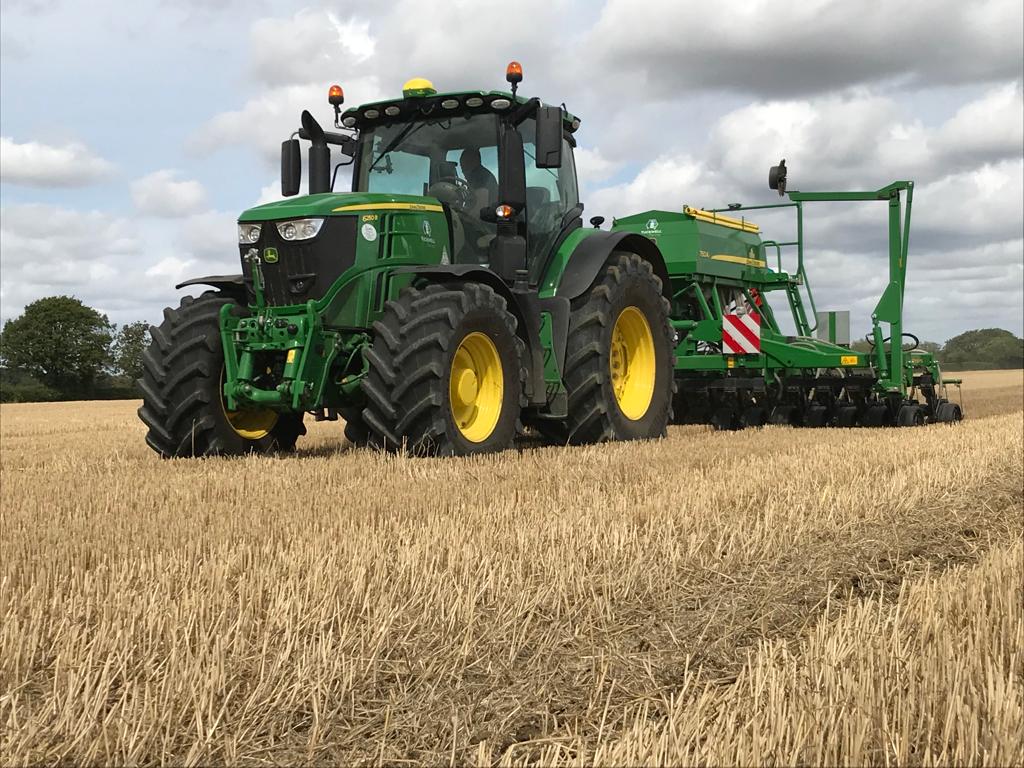 How has autumn started for you?

Towards the end of harvest, I was concerned over the moisture levels moving forward for planting oil seed rape. On one part of the farm, we got 37mm of rain in mid-August, meaning we were able to plant 40 ha of oilseed rape in that area. The remainder we attempted to plant in September, however unfortunately due to lack of moisture only 50% survived. Overall, we have ended up with 80 hectares of oil seed rape planted in total for this year.

We have also now finished drilling 430 hectares of winter wheat using our John Deere 750a drill which went in well. Although there is still a lack of moisture in the seed beds, emergence has been fairly consistent, but there are still areas that are too dry, so we could definitely do with a bit of moisture to keep the crops going. We have also planted 100 hectares of cover crops destined for Parsley next year. All that remains to drill is 40Ha of Winter Beans which should go in this week.

Was this a good harvest?

Overall harvest 2022 was successful with good average yields. Wheat did well, averaging over 10 t/ha, as did peas, which averaged 4.5 /ha, with the best field reaching 5.5 t/ha. Oil seed rape was fairly average at about 3 t/ha. Unfortunately, Parsley wasn’t so successful this year, averaging 500 kilos per hectare, just about covering our input costs. Parsley is a heavily water dependent crop, and due to the lack of moisture, this was expected.  Moving forward we are considering a water management grant, to be able to store water on the farm and have it readily available to irrigate Parsley. Therefore, mitigating the risk of no rainfall.

This harvest we ran our new John Deere T670 combine which went without a hitch, and we were very impressed. We also ran a new 30ft flex draper this year, which was exceptional. I would say it increased performance by 10%.

Overall, I was very pleased with harvest this year apart from the parsley!

What would you like to change for next year?

I would like to add a Vaderstad Swift on to the farm, to replace our current Vaderstad TopDown. We would use it to cultivate down to 80 – 100mm depth. The idea of the Vaderstad Swift is to incorporate more crop residue. We may look at changing the sprayer in the near future. We will stick with a trailed sprayer but start looking at new technology that’s available on it. That will be the next big purchase!

In terms of drainage – it’s been too dry! We tried to do some drainage in August however due to the lack of moisture our machine was unable to trench without causing damage to it! We will come back to this throughout the winter and spring.

Related News
Tuckwells
Special offer on Blec Seeders!
With this years cutting season coming to a halt, its...
Read more
Tuckwells
Get your Spring gardening off to a flying start…
Tedious though it might be, early Spring cleaning in the...
Read more
Agriculture Machinery
New tractors offer power, agility and intelligence
John Deere’s latest generation 7R Series tractors include a new...
Read more
Agriculture Machinery
Set up your tractor and implement with one click
John Deere’s new AutoSetup system enables farmers and contractors to...
Read more