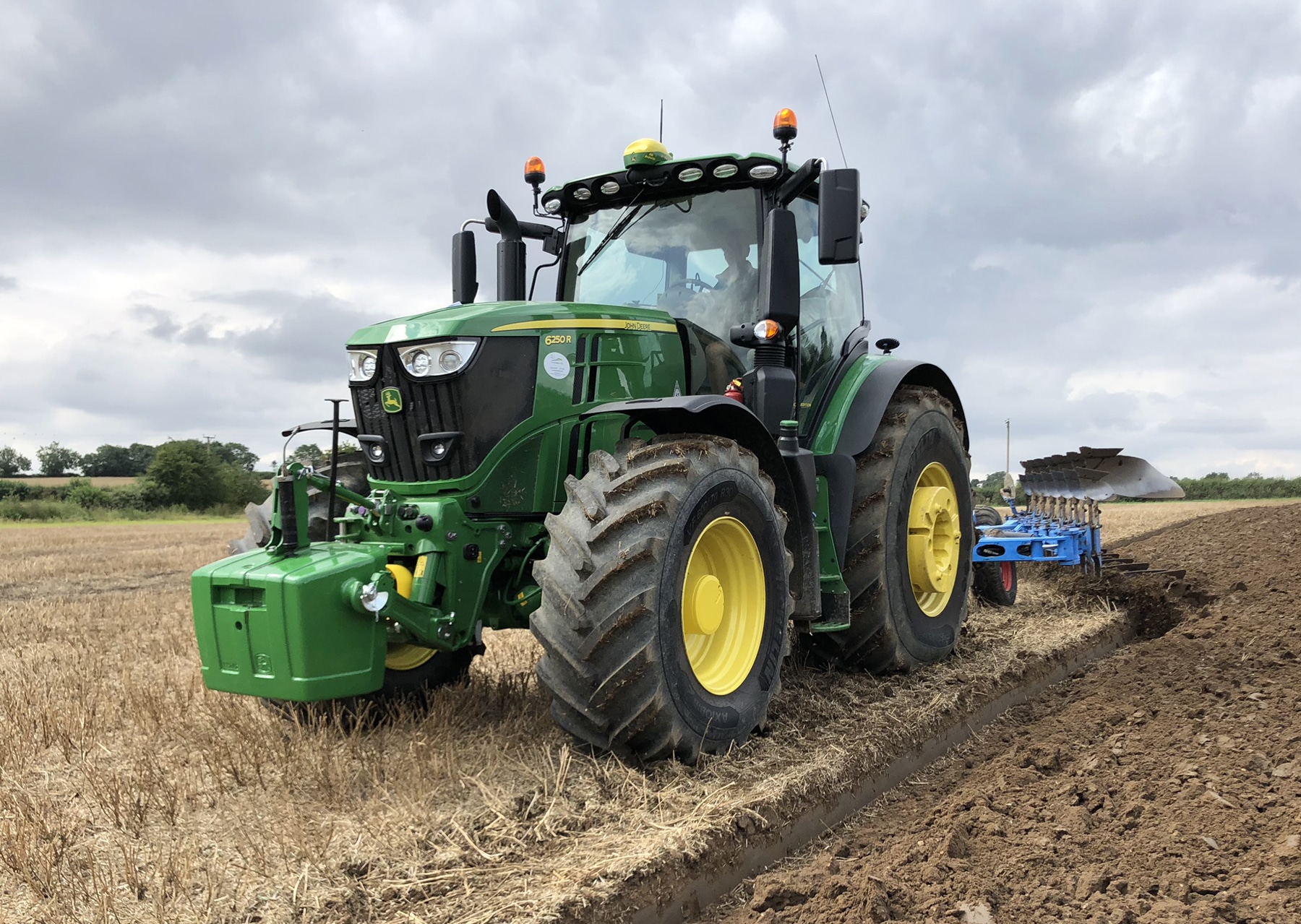 Investing in three identical John Deere 6250R tractors, capable of carrying out almost any task and equipped with the latest Michelin AxioBib 2 VF tyres to reduce soil compaction, has been key to improving operating efficiency for Bedfordshire-based Bedfordia Farms.

“Our Bedfordshire machinery fleet included 14 tractors from 120 to 620hp,” says assistant arable manager ‘JJ’ Ibbett. “All except six were John Deere, but because we tended to add to the fleet rather than trade in, we not only had operating systems from two manufacturers but also a range of concepts on tractors of various sizes and ages making operations complex, especially for seasonal workers.

“We therefore reduced and updated the fleet, standardising where possible for improved reliability and efficiency and to lessen our peak labour requirement. With other machinery updated at the same time, seven tractors were replaced by four more versatile machines.”

John Deere tractors have been used here for more than 30 years and large, high horsepower machinery has been favoured. Supplied by local John Deere dealer P Tuckwell, the new arrivals included a 6155R and the three 6250R models, which have been key to the tractor fleet changes.

The choice of the 6250Rs was based on their year-round suitability for almost any task, matched with full-time operators and working a large number of hours. Their role includes primary and secondary cultivations, ploughing, corn carting, muck spreading, drilling and hedge cutting, plus other general work.

“Our previous 6210R was versatile, but couldn’t do enough of the key tasks,” says JJ. “We also have a 7310R which suits heavier cultivations and drilling, but it’s bigger than necessary for other work. Reviewing the operating hours across our fleet demonstrated that tractors under 230hp worked the most. Therefore, the 6250R with up to 275hp and enough traction for 80 per cent of our work was the logical option, and having three identical models together with duplicated implements meant they would be busy throughout the year.

“Understandably there was some initial reluctance to move from larger tractors, but we tried a demonstration 6250R and all liked it, especially the CommandPRO joystick. It’s easy to set up and use and the creep feature is superb. Although we considered other brands initially, these didn’t progress to demonstrations as the John Deere solution seemed ideal and back-up from our dealer is so good.”

It was also suggested that fitting the latest 650/85R38 and 600/70R30 Michelin AxioBib 2 tyres with VF technology would further improve performance from these versatile tractors. Compared to standard tyres, the AxioBib 2 VF can operate at 40 per cent less pressure or carry 40 per cent extra load at a similar pressure, while also achieving 28 to 35 per cent more traction, seven to 10 per cent increased productivity and a potential four per cent yield increase from the enhanced soil protection, according to Michelin.

Local John Deere territory manager David Purdy is a tyre and soil protection specialist, and he believes the tyre upgrade will provide multiple benefits. “Research indicates that soil damage can be substantially reduced by lowering axle weights to below six tonnes and getting tyre pressures down to single digits. The 6250R with AxioBib 2 VF tyres achieves both of these targets, not to mention the potential for fuel savings.”

The three 6250Rs that Tuckwell delivered to Bedfordia were the first fitted with the new tyres in the UK and, after weighing the tractors and implements, Michelin calculated the required ballasting with inflation to 9psi for all expected operations. “We would definitely choose them again,” says JJ. “These are super flexible tractors, but the tyres provide the grip needed for larger implements such as our three 8m Horsch and Vaderstad drills, and 6m secondary cultivators.”

Although 9psi is suitable for transport too, Michelin suggests inflation pressures up to 6psi higher for intensive road use can optimise ride quality and improve wear characteristics. “Short journeys are fine but for longer periods and higher speeds, operation at 15psi improves ride quality and the tractors feel more stable,” says JJ. “We would like to see central tyre inflation added to the John Deere options list for even better results from these tractors and tyres.”

Previously a 12-furrow trailed plough was pulled by a 9630 articulated tractor, but the 6250R copes well with a seven-furrow semi-mounted unit, achieving adequate grip while running on top.

“Clearly much of our work is at the top end of the 6250Rs’ abilities, but they perform well and the operators like them. We expect that over time our soils will benefit from the changes made, specifically with the reduced machinery weight and ground pressure leading to less compaction at depth. In turn this should result in a reduction in power requirements and potential changes in our cultivation strategy. We still have two 300hp tractors available when extra power is needed, and we will monitor each season to learn what works best and what is right for us.”

To find out more about how P Tuckwell’s can make your farm more efficient, contact your local P Tuckwell’s outlet.