WE ARE RECRUITING!! Click here to find out more about careers at Tuckwells
Home News & Events New security feature locks thieves out
Back to Results 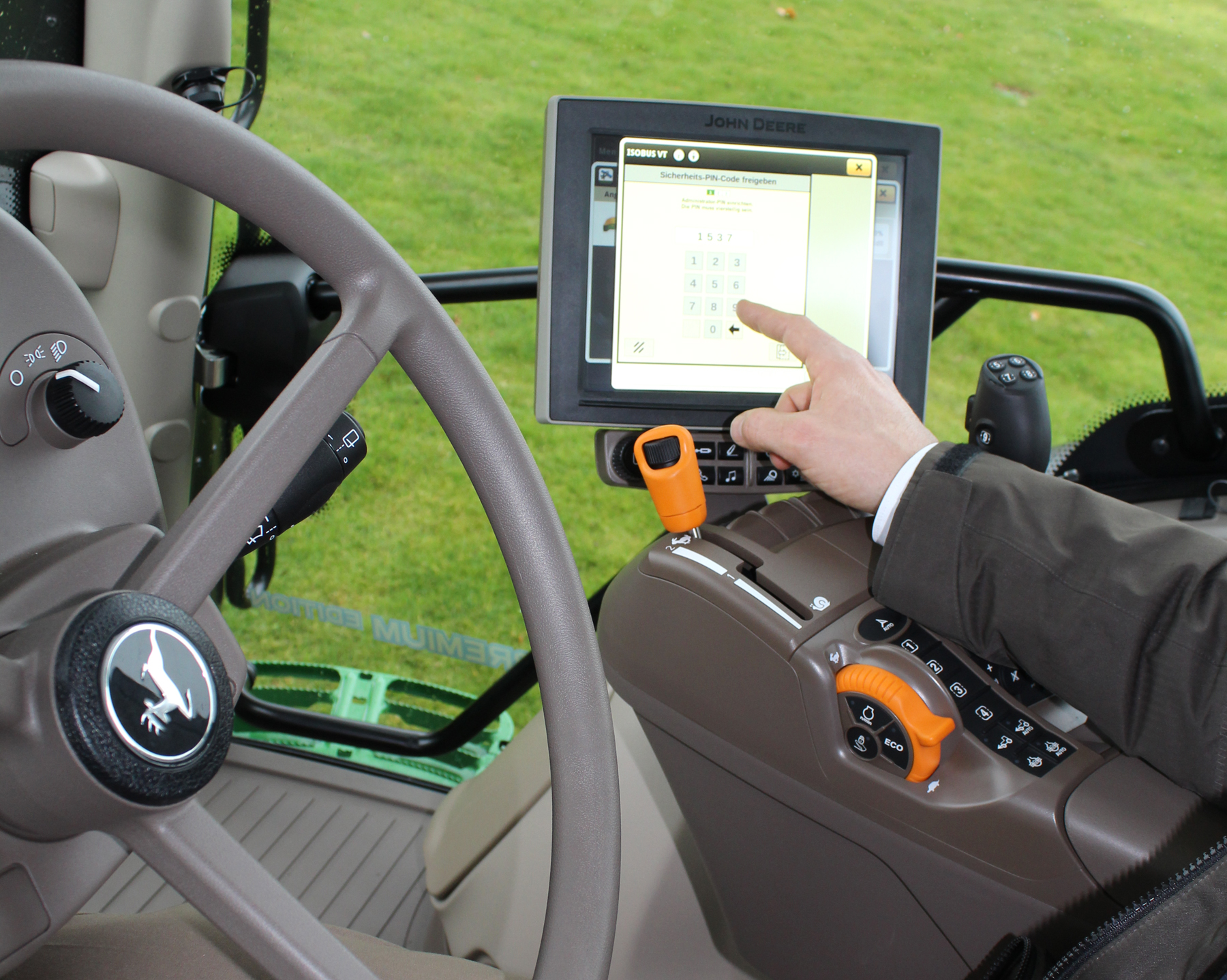 John Deere is now offering a new PIN code locking system to help deter the theft of valuable GreenStar in-cab displays and StarFire satellite receivers. This has been designed to make it impossible to use the components if they are stolen.

Because of their popular ‘plug and play’ design, John Deere displays and GPS receivers have also become more susceptible to theft compared to some other systems on the market. Until now, they could only be locked and protected mechanically. To increase the level of protection, John Deere has therefore introduced the built-in PIN code lock, similar to that used on smartphones, for both components.

The PIN code for the display and the receiver can be entered via the John Deere display. If the user forgets the code, they can continue working for a limited period, up to a maximum of 72 hours. After this a Master Unlock Code is required, which can be easily generated in the StellarSupport online portal. The customer’s MyJohnDeere login grants access to any John Deere component previously registered in their StellarSupport account.

The new PIN code locking system is now available for John Deere 4240 and 4640 Universal Displays and the StarFire 6000 receiver. It is bundled with the recent 19-1 software update, which permits the upgrade of these specific displays and receivers.

This latest security feature complements the range of precautions already introduced by John Deere this decade to deter thieves. The company’s agricultural tractors sold in the UK and Ireland, including the 6M, 6R, 7R, 8R and 9R Series models that are made in the company’s main factories at Waterloo in the US and Mannheim in Germany, are fitted as standard with the CESAR Datatag security system, as well as an immobiliser system whereby the key has a transponder unique to each individual tractor.

This means that while any other John Deere tractor key will still fit the door and ignition, the tractor won’t start without the proper key. John Deere was the first company to introduce the unique key system as standard on a full range of tractors in the UK and Ireland, in 2011. Other security related items are also available from dealers, such as lockable fuel tank caps and separate door lock keys, as well as immobiliser systems from the John Deere owned Vapormatic all-makes parts business.

In addition, all 7R, 8R & 9R Series tractors have JDLink telematics fitted as standard, with a one-year communications licence free of charge. In addition to the fleet management, machine optimisation, remote diagnostics & remote access functions, JDLink also includes the ability to geofence machines, so that SMS or email messages would be sent if the machine moved outside a predefined area.

JDLink also allows a ‘curfew’ to be set, which would again warn the owner if the machine was turned on during a pre-defined period (say, between 10pm and 6am). While this system is standard on the large tractors listed above, it is also available as a factory-fitted option on 6R Series models, or it can be field fitted on any other vehicle with a 12V power supply.